Chapter 12 — Events and Venues
We have guidelines on running lunches and, in 2005, Victoria Mackenzie, who has run the London Lunch and helped at Sheffield, wrote down the model she used. 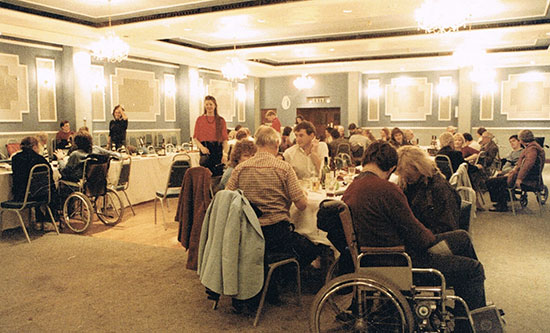 London lunches have been held on the second Saturday of every month since we began, at the following venues (and we appreciate their hospitality):

•  All Bar One Farringdon
•  Leon, Bankside
•  The Paternoster, St Pauls
*   Finch’s Finsbury Square
Every August, since 1985, we’ve enjoyed a picnic in Russell Square.
Women’s Events have been held at:

Parties have been held in members homes around the country and also held at:

The London Gadabouts enjoyed a good choice of outings and members went clubbing at the Bubble Club every month.
Local lunches have been held in Cardiff, Highley Shropshire, Bolton, Bognor Regis, Newport, Bristol, Cambridge, Nottingham and Manchester, Ipswich, Kings Norton(near Birmingham), Highworth (near Swindon, Wiltshire) Reading, Brighton, Watford and Southend and Inverness. We have run holidays, weekends, and jaunts to Amsterdam. Events are organised by members and they also publicise our club at events such as The Mobility Road Show.
Outsiders helps to run the Disability Field at Glastonbury and, until recently, had a stand at Erotica in London.