Chapter 3 — Crafting the Club
Nothing much happened so, in January 1979, I said to Patricia and Nigel, “let’s help”. Nigel agreed to answer the phone, and Patricia to advise us, and we decided on the name Outsiders, because that’s how disabled people feel when it comes to sex and love. We managed to get some wonderfully positive coverage by Katherine Whitehorn in The Observer, and gained dozens of members straight away.

I had no intention of creating a disability club following in the footsteps of PHAB or groups playing ping pong in community halls, with helpers. Outsiders would be a dignified club, stylish, glamorous and worldly. My only inspiration came from the film Stepping Out, about a performance of Madame Butterfly by learning disabled people in the Sydney Opera House.
I found an amazing assistant, a model called Vieta, who was as enthusiastic as myself. She came round to my house every day for several years, helping to set Outsiders up. We had such fun — hilarious things would happen. I remember a blind girl saying after she’d introduced her new boyfriend to her dad, the dad had said, “You can’t go out with him: he’s black.” Her response was, “So? And how was I supposed to know?”
Vieta’s friend, Ann Hills, wrote an article in the Guardian which brought two hundred more members. I bought a Kalamazoo filing system (this was long before computers) and each member got a strip for their name and details, and coloured dots signifying the type of impairments and romantic aspirations they had.
We produced a really beautiful leaflet which was based on the design of one of the top health farms in California. Right from the start, we had the image of a posh gentlemen’s club. The leaflet included these three quotes:

“It’s obviously such an excellent idea and I think it’s courageous and original of you to table it.” Katherine Whitehorn

“I think you know how interested I was in all you told me about your club. Please keep me in touch. I should think it a privilege to be consulted, if ever the need arises!” Holderness, House of Lords 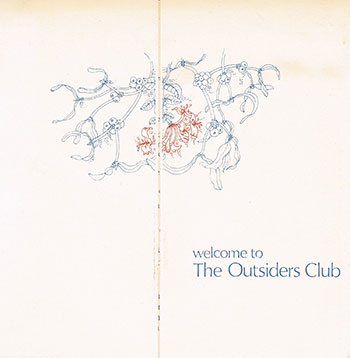 “I believe that yours was the most humane thought — and action taken — amongst the many worthy ideas which appeared in Forum’s pages over the years. I wish I could do something more or better than just pay my membership fee for the next 50 years, Please let me know if you think I could.” A humanitarian in Paris, and member for 50 years

At the same time, Dr Wendy Greengross started another organization called SPOD: the Sexual Problems of the Disabled. They were well funded, and seemed to spend all their time in meetings, where the word sex was whispered as the letters s  e and x! We tried to be friends.