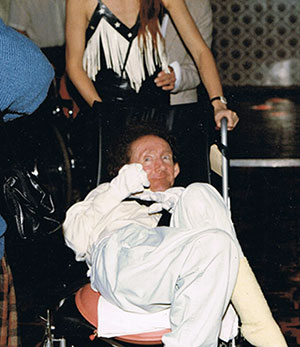 The first Outsiders party was held at 48 Boundary Road in London, a revolutionary new residential establishment, purpose built for its disabled residents to run themselves. The party was a blast, attracting almost two hundred people: members, friends and people who were simply stunned and excited that such a club could exist. Many people came along just to celebrate our existence.

Parties held at Boundary Road didn’t cost anything and people bought their drinks at the bar. In fact, running Outsiders was was costing very little. Members paid a small annual fee, and the club was run from my home. We met regularly in a restaurant run by Peter Boizot another friend of Vieta’s, Pizza Express where everyone paid their own bill. The only cost was printing phone and postage. It was much too exciting to worry about all the time it was taking, and Vieta and I had plenty of time anyway. David, by this time, had lost interest, but Nigel was very supportive, while he was setting up his own tape magazine for blind people, Soundaround.